"You'll shed a tear or two, possibly more" - The Guardian

Older Than Ireland is a landmark documentary that tells the story of a hundred years of a life as seen through the eyes of thirty Irish centenarians.

The film was one of the most successful Irish documentaries of all time in terms of domestic and international box office and won various awards, including Best Documentary at Galway Film Fleadh, The Irish Times Ticket Awards and the Irish Film Festival, New Jersey. It also won the Director's Choice Award at the Boston Irish Film Festival.

The film was uniquely invited to play twice in the National Gallery of Ireland.

“The subjects are Irish, but the subject is life itself.”
- The Film Journal
"One of the most unique and insightful documents ever committed to film in this country"
- Sunday Independent
"Funny, poignant, fantastic... oh, just go and see it."
- RTE Ten
"It’s an idea both perfectly simple and simply perfect."
- Seattle Times
“Delightful”
- New York Times
"The film swells with poignancy, wisdom and humour."
- Irish Times
You'll shed a tear or two. Possibly more."
- The Guardian
"Older Than Ireland deserves attention.”
- Boston Herald 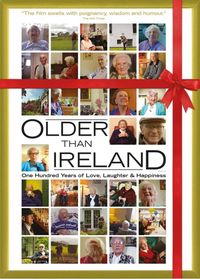 Rating:12A
Suitable for 12 years and overFilms classified 12A and video works classified 12 contain material that is not generally suitable for children aged under 12. No one younger than 12 may see a 12A film in a cinema unless accompanied by an adult. Adults planning to take a child under 12 to view a 12A film should consider whether the film is suitable for that child. To help them decide, we recommend that they check the Ratings info for that film in advance. No one younger than 12 may rent or buy a 12 rated video work.
Country: Ireland
Language: English
Released:29 April 2016
Duration: 81 min
Genres: Documentary